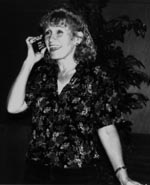 (Premiere May 13, 2000 at the Palo Alto Art Center.)  The world premiere of The Answering Machine strikes the right chord in conveying miscommunication in our technological age. John Beeman, composer, has written topical operas before. Noteworthy is Law Offices, performed on the steps of the San Mateo (Calif.) County courthouse and The Great American Dinner Table, about the Vietnam War which was heard on National Public Radio. John Beeman has collaborated with librettist Carla Brooke on two earlier projects, El Condor, a children’s musical, and Foam, a theatrical piece.
Here is a video of the 2000 premiere of The Answering Machine:

The Answering Machine, a one-woman one-act opera, starred Dorothy Donéll, soprano, who has won two international competitions. Jefferson Packer, musical director, is a Harvard graduate and Pocket Opera accompanist. Also, on the program — scenes from Law Offices and Foam and a new electro-acoustic work, Dear Composer. The show was directed by Jenny Lord.
The performance was sponsored by a grant from The Peninsula Community Foundation and was produced in cooperation with the City of Palo Alto Arts and Culture Division.  Listen to “The Was A Time” from The Answering Machine.

(1996) Full-length opera, libretto by the composer. 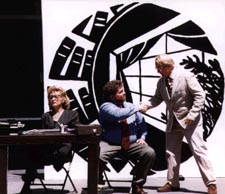 The story of Law Offices, set in the present, involves a corrupt legal team who are husband and wife. Howard is the attorney; Elaine the legal secretary who really runs the practice. They have taken on a controversial case of a Mexican-American farm worker, not for virtuous reasons, but merely to advance the lawyer’s career. Into this scene comes Dale, a male law student hired as a new secretary, Mr. Olsen, a gregarious accountant, Jenny, the accountant’s assistant, who much admired by Howard, Elaine’s aging mother, who is belittled by her daughter, and the farm worker himself who has ethical doubts about his own case. The result is much dramatic tension, a fair amount of ironic humor, and a final tragic ending.The action takes place in the law offices of Howard Comstock, located in an American suburb and set in the present. There are three offices. Elaine and Dale share the front office; Howard has a large office stage left: and Mrs. Ludov has her own small office upstage right. The offices are typical — wall to wall carpeting, wood paneling, and bright neons; and are typically furnished — large modern office desks and chairs, a comfortable couch, a water cooler and coffee pot, possibly an aquarium, framed degrees, plaques and knick-knacks on the walls, and a few unobtrusive paintings.Now are hectic times in the law offices. Presently, Howard is working on a big case that would mean a tremendous career advancement. It is the somewhat controversial case of Hector Ramos, a Mexican-American laborer, who was injured in the fields of California. The injury occurred while Hector was trying to repair a malfunctioning automated tomato picker. Hector lost three fingers in the accident.Times are busy also because it is tax time. Howard has been slightly negligent in preparing his taxes because of his work on the Ramos case. Mr. Olsen, who been called in to help straighten out the tax problems, arrives bringing his assistant, Jenny.To top off the busy state of affairs, Dale was hired only this week, and the Comstocks must train him.Characters:Elaine Comstock — Dramatic Soprano
Mrs. Rebecca Ludov — Elaine’s mother, a widow — Mezzo Soprano
Dale Sheen — The Comstock’s secretary, a second year law student — Lyric Baritone
Howard Comstock — Elaine’s husband, attorney at law — Tenor
Mr. Olsen — A tax accountant — Bass
Jenny — Olsen’s assistant — Lyric Soprano
Hector Ramos — A client — Bass BaritoneDuration: approximately 60 minutes
Performed in one act
Piano-Vocal Score
Full Score also available  Listen to Law Offices, Scene 5

Foam — A Musical Drama premiered August 23-24, 1996 in San Francisco as a theatrical-musical work (with script by John Beeman and Carla Brooke). It goes far beyond a play with incidental music in that the music is intimately tied to the drama and characters. Some of the movements are, in fact, musical “character sketches.” The sixth movement, “Duo for Daniel and Richard,” portrays the macho intellectual sparring of the two characters with bull-fighting music. Ethereal jazz harmonies are used in “Reflections on Crystal and David” to depict new-age types.

The action of this contemporary social comedy takes place in a coffee house cafe where much of the interactions have about as much solidity as cappuccino “foam.”

Instrumentation:
Clarinet in B flat tripling Alto Sax and Flute
Trumpet in B flat
Violin
Cello

El Condor is about saving the endangered species of our times — the feathered ones that used to soar freely and the legged ones that used to stay true to their child spirits. The story tells of a ten year old boy who lives with his single mother in southern California while his father is busy excavating Inca ruins in the Andes. After disappointing news that his dad is too busy with work to see him over vacation, they each encounter a condor in a dream sequence and are reminded about what is most important in life. The musical brings out human conflict with nature and the necessity of healing the wounds of man cut off from nature.

The Great American Dinner Table
(1978) One-act opera, libretto by the composer. A Tragi-Comedy in One Act

The Great American Dinner Table is set in the Viet-Nam War era, an important time in our country’s history. The story chronicles a family’s farewell dinner for their son on the eve of his departure for military service.

The opera takes place in 1967 when dramatic changes in political, social and moral areas were causing turmoil for many Americans. In no other aspect of our lives were these currents of change more shaped than in that sensitive organism of society, the American family.

The opera premiered at The University of Washington in 1978 and was also produced at the California Music Center Festival in 1980. 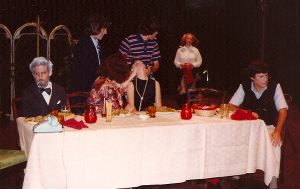